Voices Of The Stakeholders

Australia and India share many commonalities- one is its love for tea. Tea is well blended into both the cultures. The notable mention of ‘tea’ in the popular Australian bush ballad "Waltzing Matilda"is a testimony of its entwinement in the local social fabric. Today, it extends from the ballad to everyday domestic life to the blooming cosmopolitan spaces. While recording the Australian tea-drinking practices, historians have suggested that back in the colonial times, Australians were the most obsessive tea drinkers in the world. At the turn of the twentieth century, the average Australian consumed approximately four kilograms of tea annually. Much of Australia’s tea is imported from India, which is one of the largest tea producers in the world.Historically, tea has been one of India's principal agricultural exports to Australia.

Darjeeling tea, which is grown at the foothills of the Himalayas in the mountain city of Darjeeling, in the Indian state of West Bengal, is universally acknowledged as the 'Champagne of Teas' and that of finest qualities in the world. Likewise, the city itself has mesmerised innumerable since time immemorial. Its world famous Tea, Toy Train(UNESCO's World Heritage site) and spectacular Trekking tracks overlooking the grandeur of the Himalayas makes Darjeeling an incredible experience.

Tea flushes are the seasons (time of the year) the tea leaves are plucked. The first flush in Darjeeling, is harvested in spring (mainly March-April) when the freshest tea leaves are first picked. The distinctly green and refreshingly aromatic new shoots indicate the arrival of the most waited time in Darjeeling.

Finally, it is to be highlighted that women form the majority of tea pluckers in Darjeeling, who plays a very significant role in the sustainability of Indian tea industry. The sight of a mother (a tea-picker) holding a tea-leaf while at the same time carrying her child in her pouch is a sight- that is quite common. And that in a way exemplifies the nature/nurture bond. Therefore, in continuation to our social initiative Maya: Indian Women Through Indian Art, through an artwork created by a well-known woman artist from West Bengal, India, portraying the afore-mentioned bond between the 'mother and child', we plan to pay our respect to all those women working in the tea gardens in India while nurturing both their human child as well as the industry. It is in their nature to nurture.

Archived at : National Library of Australia

A few interesting facts about Darjeeling

(Its about Trade, Tea, Toy Train, Trekking and more...) 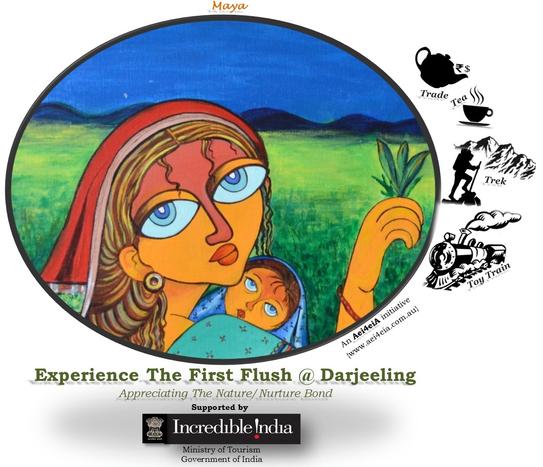