As we know, Madhubani paintings have its origin in the ancient historical city of Mithila. Mithila is geographically located in North of India. It had political and cultural connections with its adjoining states in Central India from where it is believed the ancient migrations from India to Australia took place thousands of years ago.

In the coming days, we shall unravel many more interesting facts by digging a few thousand years of historical details and evidences. Can we connect the dots? Was there ever a confluence of these two ancient and totemic art forms?

As a noted Madhubani artist said to us about the significance of ‘dots’ in her art form, “The dots…they are everywhere; Connecting them gives the context- a philosophy, a perspective, which endures and renders the power of scattered unitary initiatives and their appearance-as a collective power…”

India's Madhubani (or Mithila) art that hails from the Madhubani town of Mithila region in Northern Bihar, is one of the distinctive and significant art forms of India. The Mithila region is well known as the seat of South Asia’s ancient powerful kingdoms and is an epitome of learning, art and culture. For many centuries, women from the region have been painting their walls, floors and in recent times on paper (since 1966)-sharing their stories and domestic rituals (depicting the various elements in nature like the sun, the moon, religious plants, Hindu religious motifs, social events and more) through this highly totemic art form. The skills are passed on from one generation to the next.

While conducting a recent research (Merrh-ma~Samanvaya: Socio-Economic Impacts of Indian Migration To Australia), an interesting fact came to the fore- that of use and prominence of ‘dots’ in paintings- both in Indian Madhubani Paintings as well as Australian Aboriginal Dot Paintings. 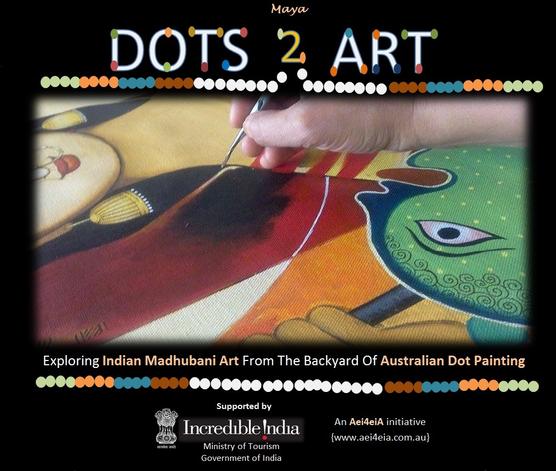