The Indian Himalayan Region (IHR) is the range of the Himalayas within India, spanning the states of Arunachal Pradesh, Himachal Pradesh, Jammu & Kashmir, Manipur, Meghalaya, Mizoram, Nagaland, Sikkim, Tripura, Uttarakhand and as well as the hilly regions of Assam and West Bengal.

With a stretch of over 2500 km from Jammu & Kashmir in North of India to Arunachal Pradesh in the North-east, the Indian Himalayan Region represents 16.2% of the total area of the country and is inhabited by approximately 3.86% of the total population (Nandy et al, 2006).

This region has a very significant role in the mountain ecosystems of the world- not only from the standpoint of climate and as a provider of life giving water to a large part of the Indian sub-continent, but they also harbour a rich variety of flora, fauna, human communities and cultural diversity (Singh, 2006).

However, the climate change and global warming is a matter of concern for the region as the Himalayan glaciers are receding at the fastest rates in the world.

​​“The Indian Himalayas: Through My Eyes” - An invitation only Art Exhibition was organised in association with the Union Bank of India, Sydney branch. It went on exceptionally well and was well attended by senior diplomats, Government officials, business leaders as well as members of media representing both Australia and India. “Everything about the exhibition is unique”, “refreshing”, “rejuvenating” were the most common responses received.

It was our honour to have The Hon. Philip Ruddock (Former Minister for Immigration and Multicultural Affairs, Former Attorney General of Australia, Mayor of Hornsby Shire Council and the second longest-serving parliamentarian in the history of the Australian Parliament) amongst us.

We are thankful to Mr. B Vanlalvawna, Consul General of India in Sydney for gracing the occasion and his kind words of encouragement.

We sincerely thank Mr. Pankaj Kumar, CEO, Union Bank of India Sydney branch without whose support this event would not have taken flight and all the distinguished guests whose presence made all the difference to this unique gathering...

Each and every of the 23 artworks created by the students of the Druk Padma Karpo School was appreciated. The jury members had a real tough time identifying the winners.

This week is the week of Deepawali- the Indian festival of lights and this is our way to celebrate Deepawali to help brighten young minds!​

​Natural calamities including erratic rainfall, high soil erosion not only reduces soil fertility and productivity but also impacts the economics and human communities. ‘People, Economy,Art, Culture & Environment (PEACE) of the Indian Himalayan Region, is thus an effort to come together, ponder, share perspectives and act towards conserving this global heritage.
PEACE
Begins in the heart;
Grows in the mind;
Manifests through will
&
Spreads through action…

We are delighted to have collaborated with the renowned Druk Padma Karpo School (Ladakh, India) or Rancho’s school of Amir Khan starred Bollywood blockbuster 3 Idiots. This very unique school situated at Shey, Ladakh (3500 m above sea-level) is one of the remotest school​s in the world yet one of the most scientifically advanced. As part of this project, Aei4eiA conducted an art competition on the theme ‘The Indian Himalayas- Through My Eyes’ for the students of the school. We are delighted to have received 23 submissions of their creative excellence.  In association with Union Bank of India Sydney, we are organising an exclusive art exhibition showcasing their efforts to people in Australia. Here's more. 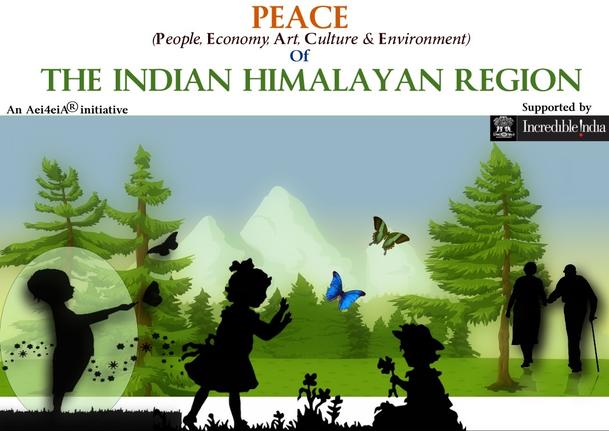