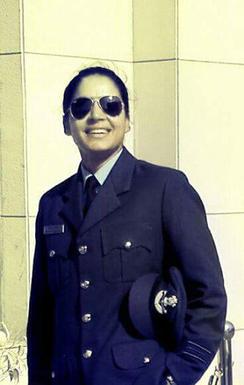 A dreamer who sees the world with possibilities. In a career span of decade plus, she has worked as a senior system engineer in the Air defence system of the Indian Air Force (IAF) and has spearheaded and effectively managed critical weapon systems for the Air Force. She was also a professional formation skydiver and represented the service in the sport that required risk and courage.  A passionate traveller at heart who believes" to travel is to live". And now after completion of her initial engagement with the IAF, she has decided to try her hands in the creative world of ceramics and is presently moulding herself to be a production Potter.

Introduction
It is undeniable that the nature of military force in international affairs has changed in the seven decades since India’s Independence. One development that has gone relatively unnoticed is the greater frequency and visibility – and consequently greater importance – of activities that can be considered military diplomacy. This is natural in peacetime, and in an international environment in which India has few true adversaries and many partners including Australia.

Although there is no universal definition of what constitutes military diplomacy or defence diplomacy, it can be thought of as any military activity with an expressly diplomatic purpose; in other words, activities where the primary objective is to promote goodwill towards India in other countries. Notwithstanding of the fact that India is currently largest source country of Australian immigration, therefore the impact of the dynamics would be immense.

The India-Australia bilateral relationship has undergone evolution in recent years, developing along a positive track, into a friendly partnership. The two nations have much in common, underpinned by shared values of a pluralistic, Westminster-style democracies, Commonwealth traditions, expanding economic engagement and increasing high level interaction. With the changing global scenario, Australia has come to look at India as a potential partner in promoting regional security and stability. This led to upgradation of bilateral relationship between the two nations to a ‘Strategic Partnership’, including a Joint Declaration on Security Cooperation in 2009.

Areas of Convergence
The areas of convergence for the countries has been witnessed in the Foreign Ministers’ Framework Dialogue (FMFD), the central mechanism for advancing the bilateral agenda, which is held annually, alternatively in India and Australia. India and Australia also co-operate in various multilateral fora. Australia supports India’s candidature in an expanded UN Security Council. Both India and Australia are members of the Commonwealth, IORA, ASEAN Regional Forum, Asia Pacific Partnership on Climate and Clean Development, and have participated in the East Asia Summits. Both countries have also been cooperating as members of the Five Interested Parties (FIP) in the WTO context. Australia is an important player in APEC and supports India's membership of the organisation.

Technical Agreement on White Shipping Information Exchange. White Shipping Agreement (WSA) is an information network protocol that allows the navies of two countries to exchange information about ships in their oceanic territories. Ships would be classified into white (commercial ships), grey (military vessels), and black (illegal vessels). It facilitates preventing any potential threat from sea from impinging a coastal and offshore security of the country.

The Bilateral Maritime Exercise- AUSINDEX. The maritime exercise is a tangible sign that will strengthen defence co-operation between the two countries as envisaged in the Framework for Security Co-operation announced by the Australian and the Indian Prime Ministers in 2014.

Exchange of Students from the Services.  Australia provides opportunities for Indian defence personnel to attend Australian professional military education courses. Currently, there are two positions allocated for Indian officers to attend courses at the Australian Defence College. Attendance is funded by Australia and offered on a rotational basis between the Indian Navy, Army and Air Force. One position is for a Major equivalent on the Australian Command and Staff College—out of 45 positions offered to foreign students—and one for a Colonel equivalent at the Centre for Defence and Strategic Studies—out of 23 positions offered to foreign students.

Comments for a Sustaining Relationship
There is a need to seek mutual agreement to incrementally implement measures that strengthen the defence relationship by improving the defence dialogue and increasing people-to-people linkages through increased participation in in each other’s professional military education courses. Improved defence dialogue would provide the platform of reassurance that the countries are not merely seeking an alliance but are seeking to strengthen the defence relationship.
9. The emergence of the global terrorist groups and its subsequent stated threat against both Australia and India provides further motivation to improve Australia-India military counter-terrorism cooperation. However, the current cooperation has been extremely limited; to senior officer visits, a small Australian Special Forces contingent conducting joint adventure training in the Himalayas with the Indian Army Special Forces, and small numbers of Australian Special Forces personnel undertaking the Indian Army Special Forces Mountain Warfare Course. A considerable progress in this field of as a policy initiative would fill a niche, especially since the similarity in national approaches provides a logical platform for enhancing military counter-terrorism cooperation between Australia and India.


Conclusion
In coming years, India is likely to become one of Australia’s most important partners in the region. The rise of India will make it one of Australia’s most important economic relationships and a key diplomatic collaborator. There are also growing expectations that India will take greater responsibility for regional security. While they share many institutions and values, India and Australia have long operated in largely separate strategic spheres. But these spheres are converging. The two countries now share many security concerns.

The potential areas for enhanced cooperation between India and Australia could be: -
a) Security Dialogues:  Both Australia and India also see considerable benefit in working together to draw Indonesia into greater diplomatic and security cooperation in the region. India, Australia, and Indonesia are the past, current, and incoming chairs of the Indian Ocean Rim Association (IORA),10 while Australia and Indonesia are respectively the current and incoming chairs of Indian Ocean Naval Symposium (IONS).
b) People-to-People Contacts.
c) Naval Exercises and Training.
d) Maritime border protection and maritime domain awareness.
e) Cooperation between other military services.
f) Defence Technology cooperation.
g) Antarctic research: A further area of potential cooperation is in Antarctic research. While not directly security related, this area relates to the shared oceanic domain and can potentially create goodwill and a feeling of oceanic partnership. Australia’s efforts in the Antarctic are conducted through the Australian Antarctic Division (AAD) based in Tasmania, while India’s are conducted though the National Centre for Antarctic and Oceanic Research (NCAOR), based in Goa, which reports to the Ministry of Earth Sciences. Both organisations are wholly devoted to scientific research.