Disclaimer: The thoughts and opinions expressed here are those by the contributors alone and do not represent the views of any other organisation, the forum moderator or that of Aei4eiA. ​Please send in your feedback/comment (if any) to info@aei4eia.com.au 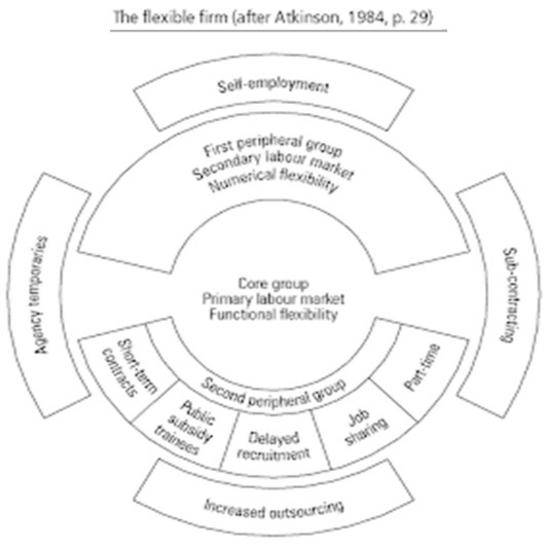 How Did The Gig Go?

Consider some common scenarios. You’re sitting at home with friends and decide to go out to a pub or to a local restaurant. Who do you call? An Uber ride share of course. Or it’s late at night, you’ve just returned home tired and hungry. Who do you call? A Deliveroo or an Uber Eats rider for your favourite pizza or Asian meal. Too easy!!! You want some short-term IT, legal or educational expertise for your business – why not hire a contractor?

Whilst the gig economy is a relatively new phenomenon, it was predicted by Atkinson (1984) in his ‘Flexible Firm Model’ (see below) which divided an organisation’s workers into ‘core’ (full-time permanent) and two levels of ‘peripheral’ employees.

According to some studies, web, mobile and software developers (44%), designers and ‘creatives’ (14%) and customer and administration support (13%) make up the majority of the gig workforce, together with Uber (Lfyt and Grab) drivers and Deliveroo contractors. A study conducted in the United States highlights five major ways that such freelancers will change the workforce:

1       Work will consist of many short-term assignments.

3       Talent agencies and head-hunting firms will play a bigger role in the lives of everyday professionals.

4       Small business growth will lead to a boost in wages.

5       Everyone will be responsible for their own success.

Did you know that these workers are not employees of these companies, but are considered to be independent contractors without access to almost of all the employment conditions most part and full time workers are entitled to under Australian law – for example, minimum pay, annual leave, sick leave or unfair dismissal appeals? And because they’re not considered employees, they naturally have no access to union or HRM support. Did you also know that the workers have to provide their own vehicles and are allocated jobs through their companies’ apps by means of algorithms – often referred to as ‘platform-enabled’ work - whereby ‘individuals perform a service-on-demand for a firm or consumer without actually being employed’(2) - and that they represent ‘the most vulnerable sections of the Australian workforce’? (3)

These workers are members of the so-called ‘gig economy’, comprised at the lower end by students, part time workers, formerly unemployed, casuals and younger employees; and at the higher end, by ‘freelancers’ with highly developed skills (for example, IT professionals, project managers, sales and marketing experts). Together, they constitute the ‘sharing economy’ – defined as ‘economic activity related to short term, project-based, outcome-defined work’4. Actuaries Digital (2020), for example, estimated that while still relatively small, this section of the economy grew ninefold between 2015-2019 and much more than that during the 2020-2021 pandemic. Quoting a 2016 McKinsey & Company report, Mills and Jan 2019 revealed that at the lower end of the gig economy forty percent are casual earners, thirty percent are free agents, and a further thirty percent work because they have few other choices (p. 7).

However, it looks as though changes in their employment status and associated conditions may be on their way. A recent judgement by the UK Supreme Court found that Uber drivers in that country ‘are workers not independent contractors’5, citing as evidence that the company app is ‘tightly defined and controlled by Uber’, including employment conditions such as pay, contractual terms and control over service provision. The judgement has encouraged companies such as Menulog in Australia to move towards the recognition of their contractors as employees with standard employment conditions, and is likely to flow over to other ride share and food delivery organisations in the near future.

2 Meijerink, J., Keegan, A. 2019. Conceptualizing HRM in the gig economy: Toward a platform ecosystem perspective, Journal of Managerial Psychology, 34 (4): 214-232.
3  Actuaries Digital 2020. The rise of the gig economy and its impact on the Australian workforce.