If you are interested to be a Maya  Ecosystem Partner please email us at: info@aei4eia.com.au 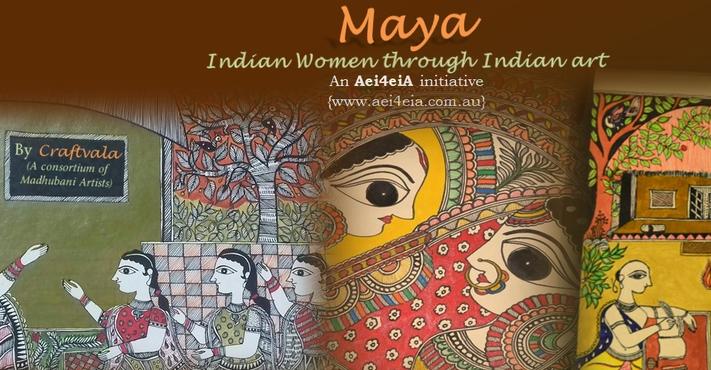 Sydney, Australia [17th May 2018] - We are delighted to be one of the very few (if not ONLY) Australian company to have introduced the authentic traditional Madhubani art straight from Madhubani (in the Indian state of Bihar) to Australia- thereby facilitating to deepen cultural partnerships between the two countries. This intricate traditional folk art finds mention in the epic Ramayana (dating a few thousand years) and has a Geographical Indicator (GI)- which means like 'Darjeeling tea' or 'Champagne', not any artwork can be called Madhubani art if it is not created in that specific region.

Background, our collaboration with Craftvala (a consortium of Madhubani artists) and why is it significant?

India's Madhubani (or Mithila) art that hails from the Madhubani town of Mithila region, Northern Bihar, is one of the distinctive and significant art forms of India. The Mithila region is well known as the seat of South Asia’s ancient powerful kingdoms and an epitome of learning, art and culture. For many centuries, women from the region have been painting their walls, floors and in recent times on paper (since 1966) and sharing their stories and domestic rituals through the art. Though, this highly symbolic art form has become widely popular in many parts of the world, in Australia, there was limited knowledge about it.

In 2016, we also made an interesting observation- that of use and prominence of ‘dots’ in paintings- both in Indian Madhubani arts as well as Australian Aboriginal Dot Paintings. Thus, here in Australia, in collaboration with India Tourism Sydney (Ministry of Tourism, Govt of India), we conducted -'Dots 2 Art: Exploring Indian Madhubani Art From The Backyard Of Australian Dot Painting'- A significant work to not only promote Indian Madhubani paintings in Australia but also explore the possibility of any connection with the Australian Dot painting. Madhubani paintings have its origin in the ancient historical city of Mithila. Mithila is geographically located in North of India and had political and cultural connections with its adjoining states in Central India from where it is believed the ancient migrations from India to Australia took place thousands of years ago. Was there ever a confluence and these two highly totemic art forms?

Around the same time, Craftvala (a consortium of Madhubani artists), India initiated a mega project of transforming the erstwhile, lack lustre Madhubani Railway station to the largest depiction of Mithila/Madhubani artwork in the world. In collaboration with the Indian Ministry of Railways, Craftvala was able to gather hundreds of artists from Madhubani village to transform over 7,000 sq.ft of the railway station premises with over 150 Madhubani paintings. In the scorching heat, be it young girls, new mothers, frail or aged women- they all came together to once again create history. In the coming days, these group of artists are also attempting to break Guinness record.

At Aei4eiA, we are very happy to have been working with these artists to hand-pick and bring in selected authentic, traditional, Madhubani artworks in Australia for the local art lovers and enthusiasts to experience!

​Maya: Indian Women Through Indian Art is an Aei4eiA initiative.